Fill the gaps in your landfill data

Envirocheck® uses a comprehensive range of data to ensure that you have made all appropriate enquiries as part your Phase 1 desk study.

Envirocheck® Historical Maps – Landfill datasets
Envirocheck® offers comprehensive active and historical landfill data prior to and following, the introduction of the Control of Pollution Act (COPA) 1974

Working with the Environment Agency since 1996, Landmark’s partnership has resulted in the introduction of new data product categories which enable greater access to information and flexibility for Landmark to develop services. The new deal includes provision of live data terms to allow smart mobile app-based products and provides more flexibility for Landmark’s clients to interactively review the data purchased in the reports.

Lucy Oxer, Head of Data Licensing, Landmark Information Group said: "We are very pleased to have extended our agreement with the Environment Agency for another five years. Landmark was the Environment Agency’s first value-added reseller 17 years ago and we work very closely with their proactive commercial team to ensure that we are making relevant, high quality data available to our clients at an affordable price. These additional benefits and simplification in terms means we can focus on delivering what the client needs, and deliver it quickly."

Mike Rose, Head of Data Licensing Development for the Environment Agency, said: "We are delighted that Landmark has taken advantage of our new product framework and moved onto a new licence. This continues the strong working relationship we have with Landmark, delivering our data and information to millions of users."

Flood Re - the Future of Flood Insurance

At the end of June the Government announced that they had agreed a memorandum of understanding (MoU) with the Association of British Insurers (ABI) on how to develop a not-for-profit scheme called Flood Re that would ensure flood insurance remains widely affordable and available. The MoU is a first step towards establishing Flood Re.

The announcement came as a huge relief for the hundreds of thousands of people in the UK who live at risk of being flooded and lived in fear of both individual property and community blight.  This announcement confirms that Flood Re is the Governments preferred option.  There is much detail to work through, but the ABI have in place a framework agreed with the Government on which to proceed.

I was panel speaker on the flood insurance debate at the recent ABI Biennial conference and the general consensus of opinion at the conference was hugely positive towards the establishment of Flood Re.

The key aspects of Flood Re are:

The proposals published by government outlines the premium cap for the flood component of a policy, which it indicates will result in a typical saving of between 30-40% on overall policy premiums for properties in high flood risk areas.

The Flood Re pool is likely to be set at £180million for the first five years, which equates to around £10.50 for each household in the UK with both buildings and contents policy.

But what will not be included in Flood Re?

I have been flooded on many occasions myself  and that one of the aspects of Flood Re that gets my thumbs up to is that it will also include surface water flooding, which in fact equates for the majority of flood insurance claims.  The SoP does not include surface water flooding and this has left those at risk of this type of flooding in a precarious situation. Another favourable aspect is that if a policy holder is put into Flood Re and takes moves to protect their home from being flooded and can prove that they have reduced their risk, they can be taken out of Flood Re and pay less for their insurance. Details of how to protect your home from being flooded can be found in our Homeowners Guide to Flood Resilience at www.knowyourfloodrisk.co.uk.

The period of consultation has just ended and we now wait for an announcement from the Government in the autumn.
Posted by Unknown at 12:07 No comments:


Here are the figures: 2 days, 9 client companies, 70 feet of yacht, 5 professional crew, 12 not so professional crew (per day) and more celebratory drinks than it is wise to report. The figures, however, do scant justice to the magnificence of our time at Cowes Week. To begin with, most our guests were complete sailing novices so the fact that we were about to be crewing millions of pounds worth of maritime bling meant that the learning curve was steep, both physically and mentally, and not least because of the jargon. Whilst there was much talk of spinnakers, jibs, sheets, grinding and booms, at least there was some respite from the torrent of technical terminology when we were told that we were being entered into a race category called “Big Boats”.

Unless you are a goldfish, you’re likely to remember that you just read “not least because of the jargon”. That was a bit of a lie. In fact, the jargon was by far the least of most of our worries because it was a matter of minutes before we were tasked with raising the sails and, being largely a bunch of gym-fearing, soft-handed landlubbers, that task was one of Herculean proportions. 72 hours after the fact, I still ache in muscles I never formerly knew I possessed. The sheer heart-pounding effort of the work was only made worse by the fact that out of the corner of an eye one would occasionally glimpse one of our professional crew using their granite-like body to perform a similar task with one hand whilst twirling a sextant in the other and debating the merits of different tacks as if the winch-work were but a mere bagatelle. 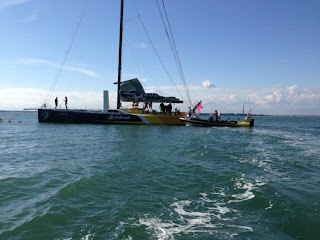 At one stage midway through the first morning one of the crew called “we’ll need the generator for this sail change” and I, assuming that my earlier prowess on the winch had been spotted, concluded that “The Generator” was a moniker the professionals had bestowed upon me as a mark of respect. Leaping into action, I proceeded to throw my not inconsiderable weight into turning the winch for a good 30 seconds (it felt like 30 days, such was the lung-busting effort), before I heard the sound of a generator starting below deck and was told that the winch I was working wasn’t currently attached to anything. Still, the name stuck and henceforth I shall be known to the great and the good of the sailing fraternity as The Generator.

When the results were in after two days on the water, our celebrations and hearty, seamanlike back-slapping were well-earned as it was revealed that we were first of all the non-100%-professionally-crewed Big Boats. Modesty dictates that I now reveal that we were also the only non-100%-professionally-crewed Big Boat, but in the end that wasn’t the point. The point was the shared experience. The point was doing something that most of us would never have dreamed of doing off our own bat, and getting to know our clients beyond the confines of our offices. The point was teamwork and a genuine sense of collective achievement. The point was the fun, laughter and memories that will stay with each of us for a long time to come. The fact that we won (sort of) was just the icing on the cake.

A policeman’s lot is not always a happy one!

The BLS captain – appointed on the night on the strength of his cricket shirt – Andy Ford (Hamer Childs) duly won the toss and decided to bat. The distinguished umpire was BLS President, Martin Allsopp (Allsopp & Co) and Tony Rollason (Landmark Information Group).

David Brammer (SGH Martineau) and Nick Kates (Pinsent Masons) opened the batting and got the lawyers off to a strong start, with David retiring on 32 not out. There were plenty of other robust contributions with the bat, playing to local rules with retirement compulsory at 30 (we all wish!) including that of Andy Ford who reached his ‘compulsory retirement’ with five huge sixes as BLS posted an imposing total of 177 in their allotted 20 overs.

A swift turnaround was called for in order that BLS would be able to bowl a full 20 overs and WMP came out to open their innings.

It was apparent from the start that not all of the police team was what you might call “regular coppers” and, bearing in mind the fact that BLS had never lost this fixture in the seven years it has been held, there was even some suggestion that the Chief Constable, Chris Sims, may have sought support from outside consultants?

WMP batted strongly through the order with several of the boys in blue (or white) retiring on 30 and playing impressive shots as the sun set over Edgbaston.

James Parkes (No 5 Chambers) opened the bowling and put the ball on the spot. Captain Andy Ford bowled tightly and there were good performances in the field, with the wicket keeper James Allsopp, the President’s son, performing admirably behind the stumps, even if he did not agree with all of Martin’s umpiring decisions. (Martin has very generous interpretation of what is going down the leg-side, when it comes to lbw decisions).

In the 17th over a ball hit straight at the umpire at the bowlers end, Tony Rollason, smashed into the stumps. Tony remained unflappable but in truth never saw the ball that, had it been slightly higher, would have meant a visit to A&E.

Another of the highlights of the evening was Pete Lowen, former Chief Exec (Birmingham Law Centre), bowling his loopy leg spin.

In the 19th over, the wicket that all BLS bowlers wanted, that of the Chief Constable, was loudly appealed for as lbw. However, umpire Tony Rollason’s decision was not out but the BLS bowlers were not deterred and kept the pressure on.

At the end of the evening the target of 177 proved three runs too many for the police and the players and umpires retired to the sports and social club to take advantage of the offered hospitality.

The Chief Constable made a gracious speech in defeat which was responded to by President Martin Allsopp on behalf of BLS. This is a great event bringing together lawyers from all sectors in a common sporting purpose and friendly atmosphere, long may it continue in the sunshine.

The shield remains in the possession of BLS for yet another 12 months. Well done BLS and better luck next time WMP.